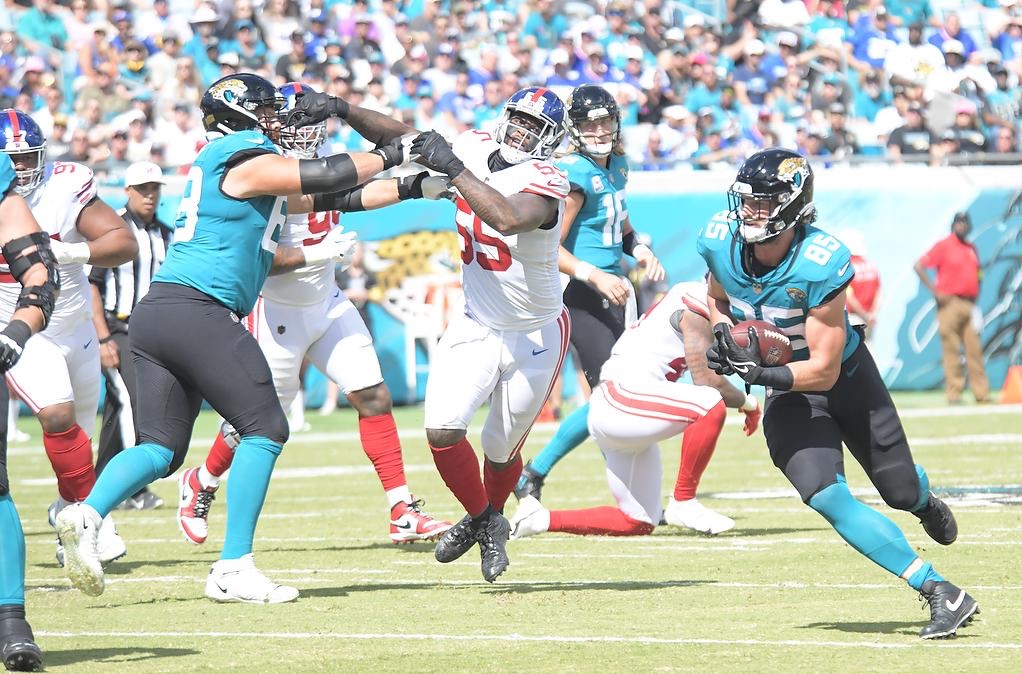 JACKSONVILLE, Fla. (Florida Sports Channel) – The Jacksonville Jaguars lost their 19th game in a row to NFC teams with today’s 23-17 defeat against the New York Giants. The Jags’ last NFC victory was against the Giants in the opening game of the 2018 season.

The Giants scored on their first nine play drive, which was capped off by a 32 yard QB Daniel Jones touchdown pass to WR Darius Slayton, followed by K Graham Gano’s extra point. But the Jaguars responded with their own six play drive, highlighted by a seven yard RB Travis Etienne Jr. sprint past the goal line. After a two-point conversion on another Etienne run, the Jags led 8-7, which remained the score at the end of the first quarter.

Early in the second quarter, the Jags fell short of scoring another touchdown, but K Riley Patterson’s 27 yard field goal extended their lead to 11-7. The Giants responded on their next drive with a 33 yard field goal by Graham Gano, to bring New York just a point behind Jacksonville. The Jags came close to scoring, but the Giants’ FS Xavier McKinney forced a Travis Etienne Jr. fumble that was recovered by NY’s SS Julian Love in the end zone. That scoring drive ended with yet another 33 yard field goal by Gano, putting the Giants up 13-11 at the half.

Early in the third quarter, Travis Etienne Jr. excited Jaguars fans with a 49 yard run. That scoring drive later ended with a 1 yard QB Trevor Lawrence touchdown run. But Riley Patterson missed the extra point, which was blocked by CB Nick McCloud. But the Jags were up 17-13. The Jaguars defense also did a fine job stopping the Giants from scoring on their next drive, thwarting a pass attempt by Daniel Jones to WR Marcus Johnson on 4th down with 2 yards to go on the Jacksonville 3 yard line. The Jags also stopped the Giants’ next drive, as well. The score remained 17-13 at the end of the quarter.

A defensive interference penalty by Jaguars CB Tyson Campbell set up a one yard touchdown run by the Giants’ Daniel Jones. After Graham Gano’s extra point, the Giants pulled ahead 20-17. A 34 yard field goal by Gano extended the Giants lead to 23-17. The Jaguars put up a valiant effort in the final minute of the game, advancing to the one yard line, before time ran out.

Trevor Lawrence finished with 310 yards and a rushing touchdown. Travis Etienne Jr. led the Jaguars rushing with 114 yards and a touchdown. Christian Kirk was the leading receiver with 96 yards. OL Cam Robinson suffered a shoulder injury in the second quarter and was out for the rest of the game.

Today’s attendance was 65,664, the highest at TIAA Bank Field this season, though there were many more blue than teal jerseys in the seats. Next week, the Jaguars travel overseas to take on the Denver Broncos at London’s Wembley Stadium. Kickoff will be Sunday, 10/30 at 9:30 a.m. Be sure to follow www.FloridaSportsChannel.com and www.FloridaNationalNews.com for more.