Swiatek, Jabeur will meet in 1st US Open final for both 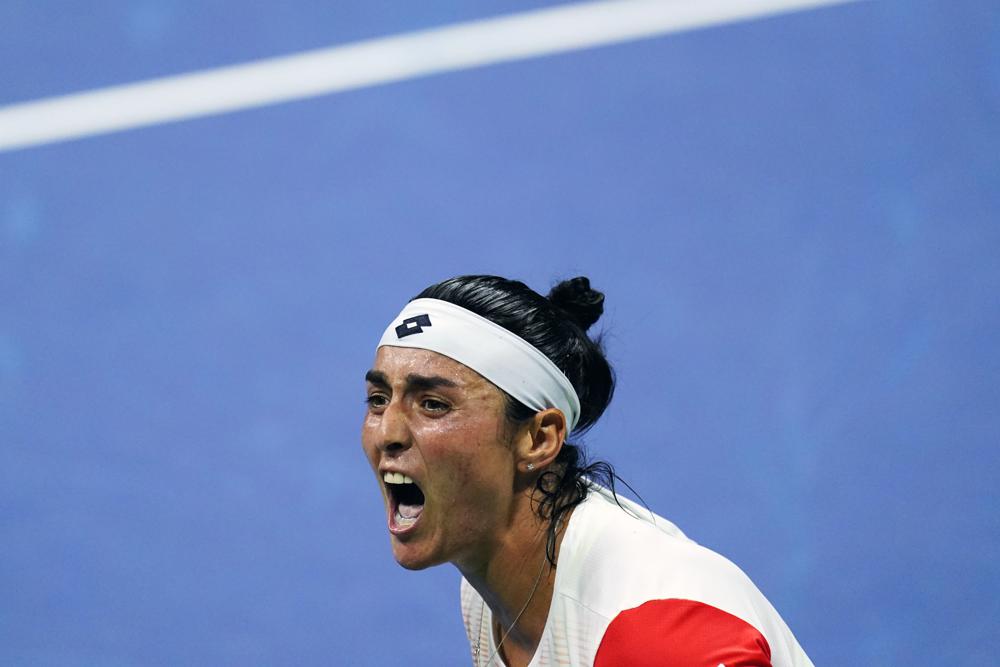 Ons Jabeur, of Tunisia, reacts after a point against Caroline Garcia, of France, during the semifinals of the U.S. Open tennis championships on Thursday, Sept. 8, 2022, in New York.(AP Photo/Matt Rourke)

NEW YORK (AP) — Getting to a Grand Slam final is no longer new to Ons Jabeur. She figures it’s time to add a major trophy to her list of groundbreaking accomplishments.

And she’s sure she is more ready to do it at the U.S. Open than she was at Wimbledon two months ago.

“Feels more real, to be honest with you, just to be in the final again. At Wimbledon, I was kind of just living the dream, and I couldn’t believe it,” Jabeur said after ending No. 17 Garcia’s 13-match winning streak, which included a victory over Coco Gauff. “Now maybe I know what to do.”

The first step for Swiatek to turn things around came when she headed to the locker room after the first set — to use the bathroom and think about what to adjust on court.

“I needed to get it together,” said Swiatek, a 21-year-old from Poland who already owns two trophies from the French Open’s red clay, including one this June, but never had been past the fourth round on New York’s hard courts.

Sabalenka, meanwhile, dropped to 0-3 in Slam semifinals for her career and 12-11 in three-setters this year. She broke for a 4-2 lead in the third set — and 17 minutes later, it was over, as Swiatek surged to the finish.

“She was just going for it,” said Sabalenka, who wore large blue mirrored sunglasses and a black cap pulled low to her news conference. “She was hitting every ball and putting me under pressure and playing really aggressively.”

Swiatek has emerged as a dominant figure in women’s tennis, with a 37-match winning streak that brought her six titles in one stretch. If she can defeat Jabeur, Swiatek will become the first woman since Angelique Kerber in 2016 to win two majors in one season.

The No. 5-seeded Jabeur, a 28-year-old from Tunisia, was the runner-up at the All England Club in July and now will be the first African woman to participate in a final at the U.S. Open in the professional era, which dates to 1968.

“After Wimbledon, (there was) a lot of pressure on me,” Jabeur said following a win that took barely more than an hour, “and I’m really relieved that I can back up my results.”

The men’s semifinals are Friday: No. 3 Carlos Alcaraz of Spain vs. No. 22 Frances Tiafoe of the United States, and No. 5 Casper Ruud of Norway vs. No. 27 Karen Khachanov of Russia.

With four-time major champion Arantxa Sánchez Vicario in her guest box — they traded thumbs-up signals at match’s end — Jabeur improved to 6-0 in semifinals this season and earned her tour-leading 92nd victory in all since the start of 2021. No. 91 came when she defeated Ajla Tomljanovic, who eliminated Serena Williams in the third round.

To Jabeur’s surprise, and delight, she heard Tuesday’s victory over Tomljanovic on Tuesday was drawing viewers back home, even though it there also was a Champions League game between Juventus and Paris St. Germain on TV.

“In Tunisia, it’s all about soccer,” she said. “But people were not watching (that) game, they were watching my game, which is impressive to me.”

Just one example of how she is changing views about tennis in her country — and on a continent.

Since pro players were first admitted to major tennis tournaments, never had an African woman or Arab woman been to a Slam final until she did that at the All England Club before losing to Elena Rybakina.

At the 2020 Australian Open, she became the first Arab woman to reach the quarterfinals at a major. Last year, she was the first Arab player to break into the top 10 of the men’s or women’s rankings and first with a WTA title.

“Definitely saying out loud what I want to do is part of me achieving things,” said Jabeur, who dropped to her knees and let out a yell when Thursday’s semifinal ended, then layed on her back.

“I’m sure it’s a lot of pressure on her shoulders,” said Garcia, a 28-year-old from France. “But she looks like to be managing it really well.”

On this 75-degree (24 Celsius) evening under the lights in Arthur Ashe Stadium, Jabeur finished with 21 winners — after one was aided by a fortuitous net cord, Jabeur put up a hand to apologize, then blew a kiss to the sky — and just 15 unforced errors.

She delivered eight aces. She went 4 for 4 on break chances and didn’t face any.

After a moment of silence to commemorate the death of Queen Elizabeth II, Garcia won the coin toss and chose to serve. She got broken right away, thanks to four mistakes. Most concerning and perhaps most reflective of nerves Garcia later acknowledged were there: She dumped what should have been an easy put-away volley into the bottom of the net.

It was a rather inauspicious start for Garcia, who hadn’t lost a set on the way to her debut in a Slam semifinal.

“Mentally,” said Jabeur, who travels with a sports psychologist, “I was so ready.”

She plans to be again on Saturday. Swiatek will stand in the way.