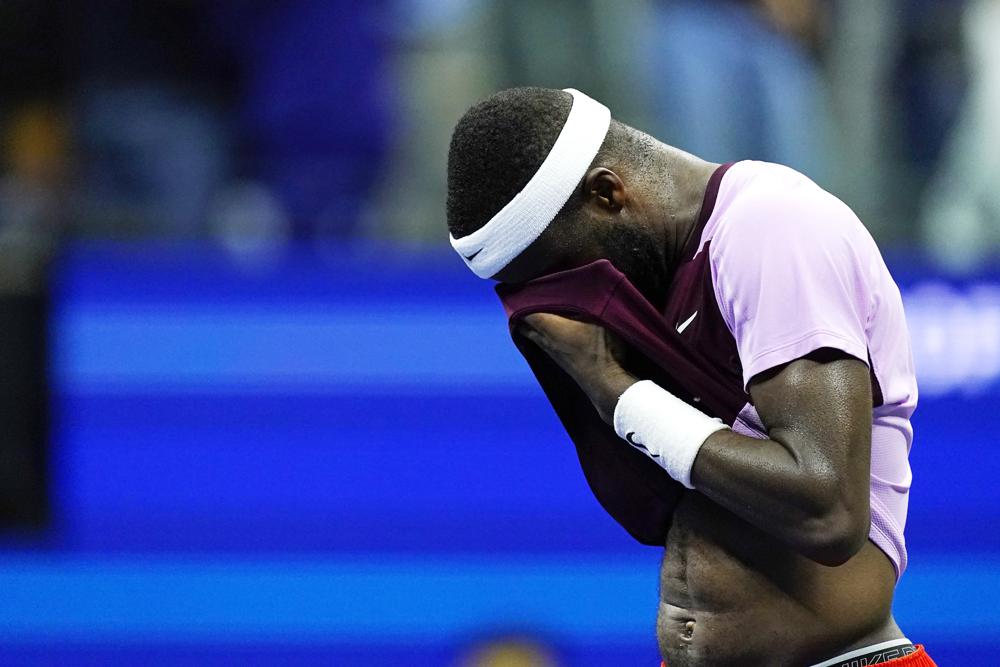 Frances Tiafoe, of the United States, reacts after losing to Carlos Alcaraz, of Spain, in the semifinals of the U.S. Open tennis championships, Friday, Sept. 9, 2022, in New York. (AP Photo/Matt Rourke)

NEW YORK (AP) — Frances Tiafoe was living his best life in his U.S. Open semifinal, just as he did throughout this magical run at Flushing Meadows, smiling and thriving, yukking it up with the fans, with his opponent, even with his opponent’s coach.

He sprinted to his changeover chair, and the mess of clothes and shoes and rackets that surrounded it, after one big point went his way. After another, he stared at all four corners of a soldout Arthur Ashe Stadium, nodding amid the mayhem. He waved his arms to ask for more support — and got it.

And, other than a real rough patch in the second and third sets, and again at the end, Tiafoe was playing his best tennis, too, keeping alive his hopes of becoming the first American man to reach the final at Flushing Meadows in 16 years and, perhaps, the first to win any Grand Slam title in 19 years. Tiafoe managed to save a match point in the fourth set Friday night, extending the contest for more than another hour, and another two in the fifth, yet could not finish the deal, losing to No. 3 Carlos Alcaraz 6-7 (6), 6-3, 6-1, 6-7 (5), 6-3.

When it was over, when he ran out of comebacks, Tiafoe, a 24-year-old from Maryland who is ranked 26th, wiped away tears and apologized to the spectators who joined him for this rollicking ride.

“I wanted to be here on Sunday, holding the cup. I had it in my head,” Tiafoe said, adding about the fans: “I know they’re proud of what I did. … I wanted this one to end a little differently, that’s all.”

Before this tournament, he only once had been past the fourth round at a major, and lost immediately after that. This time, he got to the quarterfinals by beating 22-time Grand Slam champion Rafael Nadal, followed that up with another victory, and then gave Alcaraz all he could handle for big chunks of their 4-hour, 19-minute thriller that ended slightly before midnight.

“I just proved that, honestly, I mean, I can play with the best, obviously,” Tiafoe said, “and I’m capable of winning Grand Slams.”

When it was over, Tiafoe and Alcaraz hugged. And then Alcaraz — a 19-year-old from Spain who will face Casper Ruud, a 23-year-old from Norway, in the final — pointed to Tiafoe, as if telling a crowd that included former first lady Michelle Obama, to make sure they showered him with praise.

Tiafoe’s “Cinderella story,” as he put it, might be well known, but bears repeating: His parents emigrated to the United States from Sierra Leone during its civil war in the 1990s; his mother worked two jobs, including as a nurse, and his father helped build the Junior Tennis Champions Center in College Park, Maryland. From an early age, Frances and his twin brother, Franklin, would spend a lot of time at the facility, sometimes sleeping there, while Dad was a maintenance worker there.

The JTCC held a watch party at a restaurant near its campus on Friday night.

“He represents what we’re all about, which is to foster a love of tennis,” said the group’s CEO, Ray Benton. “Frances lives, eats and breathes tennis, since he was 4 years old.”

Which is part of why Tiafoe is convinced this will not be his last chance on this sort of stage. Why he figures the improvements he’s made in diet — “I didn’t go out to dinner one time” during the U.S. Open, he noted proudly — and fitness will continue to pay off.