ORLANDO, Fla. (FSC) – The Charlotte Hornets came into Monday night’s match against the Orlando Magic with LaMelo Ball back and ready to do damage. 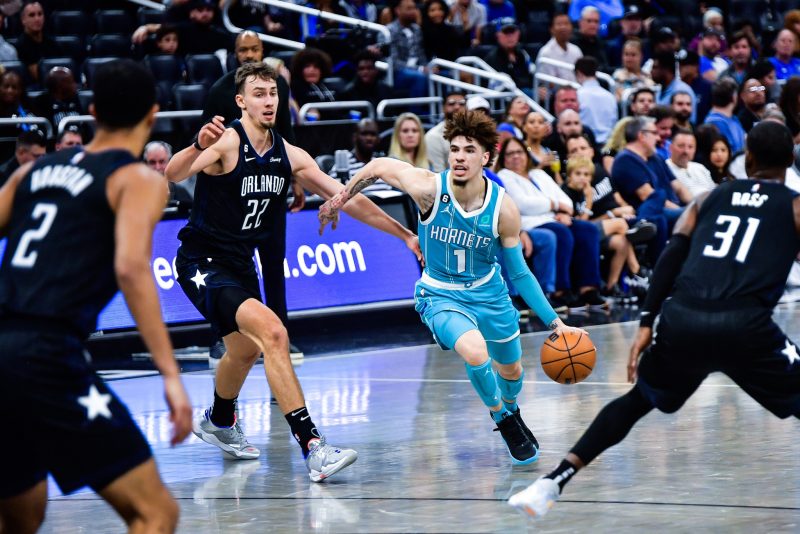 ORLANDO, Fla. (FSC) – The Charlotte Hornets came into Monday night’s match against the Orlando Magic at Amway Center with their darling LaMelo Ball back and ready to do damage. And they did.

For their part, the Magic came into the game with the wind at their back after Friday’s 114-97 win against the Phoenix Suns. However, their defense–or perhaps Charlotte’s more aggressive offense–caused them to play from behind.

The numbers showed that the Magic defense needed a bit of help. They had six turnovers to Charlotte’s two.

Franz Wagner and Mo Bamba (off the bench) did the heavy lifting for Orlando in the first quarter, each contributing eight points. Bamba also offered three rebounds and was sharp on his shots, going 3 for 3 on all field goals (including his one three-pointer) and 1 for 2 on free throws.

The Magic lagged behind 31-23 by the end of the first quarter.

In the second quarter the Magic turned the ball over seven times to Charlotte’s three. To their credit, Wendell Carter, Jr. posted eight points and two rebounds while Bamba put up six points with four rebounds.

The Magic made a good rescue play with three minutes left in the first half. The Magic had possession of the ball and twice turned over the moment they got in the paint. Jalen Suggs redeemed his team on the second turnover, stealing the ball and bringing it back to the Magic’s paint. His layup attempt got blocked, but Bol Bol came in clutch with the offensive rebound and dunked it in.

While LaMelo was scoreless in the second quarter, he contributed five assists, while Mason Plumlee and Terry Rozier did the scoring with six points each and Plumlee clocking three rebounds.

Magic head coach Jamahl Mosley switched things up a little bit in the third quarter, bringing his bench in. Terrence Ross, Caleb Houstan, Kevon Harris and RJ Hampton all got touches. Hampton led in scoring in the third with 10 points while Caleb Houston followed with six points.

The two teams tied each other in assists and even turnovers with four, and the Magic even beat the Hornets in rebounds–16 to their 10–but the Hornets still outscored the Magic by two points by the end of the third. The difference lied in their field goals. The Hornets were 9 for 19 (47.4 percent) on field goals compared to the Magic’s 8 for 27 (29.6 percent). Additionally, the Hornets did fewer three pointers, but they did damage there too, going 2 for 7 on threes compared to Orlando’s 5 for 15. Both teams were 100 percent on free throws (6 of 6 for Charlotte and 3 of 3 for Orlando).

The narrative continued through the fourth quarter. The score reached 104-92 with 2.5 minutes left in the game.

Wendell Carter Jr.’s two free throws finally put the Magic over 100 points with just one minute left. The Hornets scored again, making the score 110-101, and Ball went to the line, missing both. His mistake, though, was diving for the rebound, fouling Bol Bol, who went to the line and sank both free throws, bringing the score to 110-103.

Charlotte’s Mason Plumlee was the team high scorer with a double double on the night, 18 points and 11 rebounds. Terry Rozier and LaMelo Ball followed with 17 points each. Ball contributed nine assists and four rebounds.

The Magic end their seven-game homestand Wednesday when they host the Minnesota Timberwolves at 7pm ET.